The north base camp of Kangchendzonga in the Zemu Valley has been "out of bounds" due a rigid permit system imposed by the Government of India and Sikkim. South Col plans to  trek to Green Lakes in October 2014! 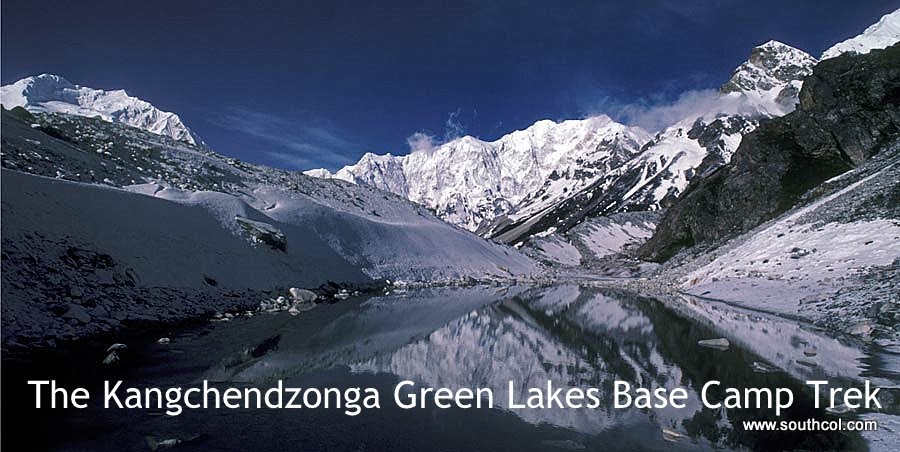 Day 1: Gangtok to Lachen by road

We leave Gangtok after breakfast and make the six hour drive to Lachen which we should reach by early afternoon. Day walks can be undertaken up the valley. Lachen has a number of carpet weaving centres in the main village and a visit to one of these is recommended.

Follow the main North Sikkim Highway which continues along the right bank of the river to Thangu proceeding north to the junction of the Lachen Chu and the Zemu Chu at Zema. The road to Zema can be covered in a jeep/land rover and would take about half an hour. After crossing the Zemu Chu by the permanent bridge, go westwards up the Zemu valley following a trail through the forest on the right bank of the Zemu Chu.  The going in this section is usually slow as the path travels through water-logged rhododendron thickets and fallen tree trunks rotting in the morass. Tallem is reached by early afternoon and we camp here.

About 3 km, before Jakthang the path crosses the Lhonak Chu which usually has a bridge though landslides can often wreak havoc in this section of the trail. Jakthang is situated in a small meadow with broken herdsmen's hut that makes a convenient night’s halt.

The path to Yabuk climbs due west through the forest and after about three hours of steady walking you reach the snout of the Zemu glacier.  The glacier forms a deep tongue of ice in the centre of the valley and is almost entirely covered with rocky debris: the main stream issues from a cave near the northern edge and the route to be followed leads past this and along the rocks of the lateral moraine. If there is no snow then the trail is defined.  Yabuk is usually reached by lunchtime and trekkers may be tempted to make it to the Rest Camp on the glacier the same day. This is only suggested if you are properly acclimatized and fit.  It is however safer to stop at Yabuk.

The rest day can be spent walking up the valley, bird watching or just lazying at camp.

The path continues to travel west and follows the glacier of the Zemu. The single trail is mainly over boulders and difficult on the feet. The Zemu Chu rushes through the glacier and as the valley opens up the great peaks come into view. The Rest Camp is situated right opposite Siniolchu and has a fabulous view of the one of the most beautiful mountains in Sikkim.  Bharal or blue sheep are often sighted on the hill opposite the Rest Camp and this is also snow leopard country. The Himalayan Bearded Vulture or lammergier can be spotted soaring overhead with the thermals.  Walk slowly as the air is getting thinner and acclimatization becomes of essence.

The trail from Rest Camp climbs gently up the valley in a north westerly direction. The walking pace is usually slow because of the altitude. On a clear morning this is one of the finest walks in the Himalayas rivaling the walk from the Machhapuchare Base Camp to Annapurna Base Camp and from Dugla to Gorak Shep in the Nepal Himalaya. Siniolchu, Simvu, Twins, Nepal Peak and Kangchendzonga are some of the giants that dominate the horizon. The camp is usually on a grassy flat known as the Green Lake Plain, the name being derived from a small tarn at the eastern end where on a clear morning the reflection of Kangchendzonga is seen in the waters.

Spend the day lazing in the sunshine and watching the peaks. The more intrepid can climb the hill behind the camp for about an hour or so to come to a high point with magnificent views both towards Kangchendzonga as well as down the valley. The Zemu gap that links the Zemu valley to the Talung valley is clearly seen from this high point.

It is possible to make the march from Green Lakes to Yabuk in one day, as the trail is mostly downhill. More intrepid trekkers and porters could try to reach Jakthang on the same day.

The way down from Yabuk follows the trail through the forest. Zema, which is the road head, can be reached by afternoon and from here it is a short drive back to Lachen. After lunch at Lachen we head back to Gangtok the same day and reach in time for dinner.