How to Trek to Everest Base Camp 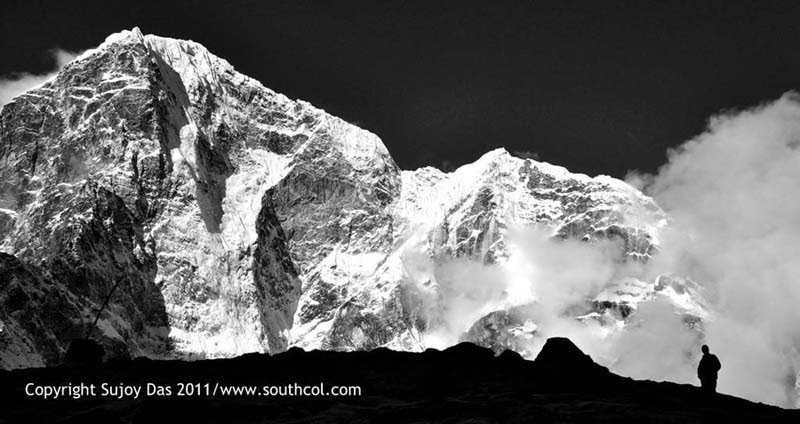 This article appeared in Conde Nast Traveller and was authored by Ranjan Pal, a South Col Trekker.

When asked as to why he wanted to summit Mt. Everest, mountaineer George Mallory famously said “Because it is there!”. For those of us who lack the resources, and perhaps the bravado, to climb to the highest point on earth, a trek to Everest Base Camp is the next best option. The Base Camp trek is physically demanding, but the payoff is worth all the trouble. When I reached the high point of Kala Pattar—600ft above the Base Camp—late one November evening, I was struck by the most sublime of sights: the final glow of the setting sun shone on the southwest face of Everest while the full moon appeared in the sky behind her west shoulder. I was there for the adventure, but the feeling of being among the greatest mountains on earth made it just as much of a spiritual pilgrimage. Here’s what you need to know to make this incredible adventure happen:

How fit do you need to be?
The question I get most often is: “Do you think I can do it?”. To which, my answer is: “Do you want to do it?”. The Everest Base Camp trek can be done by anybody with a reasonable level of fitness, but it is mental strength more than physical ability that will ultimately get you there. A persistent myth about the trek is that you need to be a super-fit gym rat who can bench-press 50kg without breaking a sweat. In reality, young men in their late 20s with an abundance of testosterone and a dearth of good sense are the most at risk as they attempt to storm their way to the base camp and fall by the wayside in droves. For the rest of us lesser mortals, a reasonable level of fitness is enough to get us there. Brisk walks for an hour a day and climbing stairs with ankle weights are excellent training in preparation.

When is the best time to go?
There are two trekking seasons in the Himalayas—April to May and October to early December. If you want to walk in snow and see orchids and rhododendrons in full bloom, go in spring. But be prepared for the weather to be fickle and for the Everest massif to be clouded over when you get there. If you want to be 100 percent sure of seeing what you came for, go in the fall when the valleys are dry and bare but the skies are crystal clear and the views stunning.

Location and terrain
The world’s tallest peak straddles the border between Nepal and China in the Mahalangur section of the Great Himalayan Range. You start your walk in at the mountain hamlet of Lukla (9,400 ft) and end your journey at almost double that height at Everest Base Camp (17,600 ft). On the way up, you will follow the valley of the Dudh Kosi, which drains the giant Khumbu glacier flowing out from the base of Everest. There is a dramatic shift in terrain when the thick coniferous forests of the lower Khumbu valley give way to the stark glacial moraines above the tree line. You will cross a number of tributary valleys, so expect a fair bit of up-and-down walk.

How long does the trek take?
Give yourself two weeks for the actual trek from Kathmandu to Everest Base Camp and back. (There is a short flight from Kathmandu to Lukla—scramble for seats on the left of the aircraft for a spectacular view of the Himalayas. And if your heart survives the hair-raising landing on the tiny Lukla strip, that’s half the battle won!). If you want to complete the grand slam and take in the Gokyo Lakes as well, factor in another three days. Of course, you aren’t trekking on all days—you have time to rest and acclimatise.

Go it alone or with a group?
As a lone traveller, you can always look to join a larger group and make new and interesting friends. I have stayed in touch with people that I met on adventure trips for years after. However, my personal preference is to go with at least one close buddy. That way you don’t have to adjust to sharing each other’s space in a room or a tent and still have time and energy to engage with the larger group.

How much will it cost and what operator should you choose?
The EBC trek can cost anywhere from between Rs75,000 to Rs2,50,000. More than comfort and luxury, focus on safety and experience. Ask plenty of stupid questions and check references in detail—your life could be in their hands. Typically, the operators will not offer evacuation insurance as a given, but it must be available as an optional extra. Taking that extra all depends on how risk-averse you are. It’s like the choice of driving with only seatbelts or having airbags thrown in as well. Some recommendations:

South Col Expeditions, a boutique outfit whom I always go with.
The Mountain Company, for international luxury travellers.
Travel Link Services, if you want the local experience

What personal equipment do you need?
Since it is your feet that will get you up and down that mountain, it makes sense to splash out on a good pair of waterproof hiking boots with solid Vibram soles and ankle support. You will also need a sleeping bag rated to keep you warm in sub-zero temperatures and a heavy winter jacket – down is the ideal material for both. Over time I have got used to a Platypus for carrying water rather than a bottle and a Petzl headlamp rather than a torch mainly for hands-free convenience.

What’s a good trekking technique?
Slow and steady wins the race. The conditions up there are tailor-made for the tortoise. Climb a hundred steps at a time without stopping or looking up, break to catch your breath, then climb another 100 steps, break—and repeat, repeat, repeat. Collapsible titanium trekking poles are invaluable in propelling you upwards and breaking your downward descent. Stick to the side of the mountain at all times, otherwise you run the risk of being pushed off the edge by a thundering yak train that commands absolute right of way on the trail.

What about acclimatisation?
Any reliable operator will build in 1-2 days for acclimatisation on the way to Everest Base Camp to allow your body to adjust to the thinner air. On this break day, you will be free to rest or, preferably, make a short hike to a nearby viewpoint. The idea here is to climb high and sleep low. Proper acclimatisation cuts the risk of acute mountain sickness which manifests itself in the form of headache, nausea and fatigue.

Will you be sleeping in a tent?
Fortunately, the EBC trek offers the option of staying in “teahouses” all the way, which saves you the hassle of carrying tents and food. A teahouse usually is a small bare room with two cots and thin wooden walls and, if you are lucky, an attached Western toilet and hot shower, for which you pay extra. Another advantage of staying in these small lodges is the camaraderie that you develop with fellow trekkers in the shared dining room—nothing like swapping stories over a few glasses of beer!

What kind of food will you be eating?
The food follows along the lines of the accommodation—quite basic, but you won’t mind too much as your trekking exertions will have you wolfing it down! Dal bhat is the basic fare, often served with vegetables and papad and you can have as much as you want. Other options are Sherpa stew, noodles, pasta and pizza—stick to vegetarian food since the meat is unlikely to be fresh. For breakfast you can expect a set menu of porridge, toast, eggs and potatoes (try the apple pancakes with honey if they are available). The price you will pay for food and drink rises with the height. So take plenty of chlorine tablets for water purification unless you are willing to shell out Rs100 for bottles of Aquafina at the base camp!

Everest Base Camp vs. Kala Pattar?
Most people have only ever heard of EBC. If you are the kind that likes to tick a box then your journey will end there but it is just a desolate jumble of ice and rock with no view of the summit of Chomolungma (the Tibetan name for Mt Everest). But if you are here for the experience, your choice will be Kala Pattar, a brown hill that rises behind the final camp of Gorak Shep. At 18,200ft, Kala Pattar is over 600ft higher than EBC and the view of Everest, flanked by its sentinels of Lhotse and Nuptse, is simply unparalleled.

What could go wrong?
The obvious one here is not being fully acclimatised, which will lead to AMS and, in the worst case, having to abort your journey as you are forced to descend to recover. I can’t emphasise enough how important proper acclimatisation is—feeling lousy high up on the Everest Base Camp trail will ruin your adventure, and it takes days to recover. Other imponderables, which are beyond individual control, are the weather—unexpected snowfall in spring can block trails—and the vagaries of air travel in Nepal, with flights to Lukla quite often being delayed or cancelled, affecting international connections.

What will you be surprised by?
If you are expecting to trek to Everest Base Camp in splendid isolation, think again. As the ultimate trekking destination in the world, it draws 40,000 people a year! So, on the downside, you are never really completely alone. Even at Kala Pattar, I found myself scrambling among the rocks for a good perch, which hadn’t been claimed. On the upside, the changing mountain spectacle that unfolds every single day on is just stupendous. Besides Everest, there is Lhotse, Nuptse, Pumori and many other peaks to gaze at, including the incredibly beautiful Ama Dablam. And if you time your journey to Kala Pattar just right, then the final tinge of alpenglow on the southwest face of Everest with the moon behind is the most spectacular of sights on earth.