Celebrating 60 on the Path to Tso Moriri 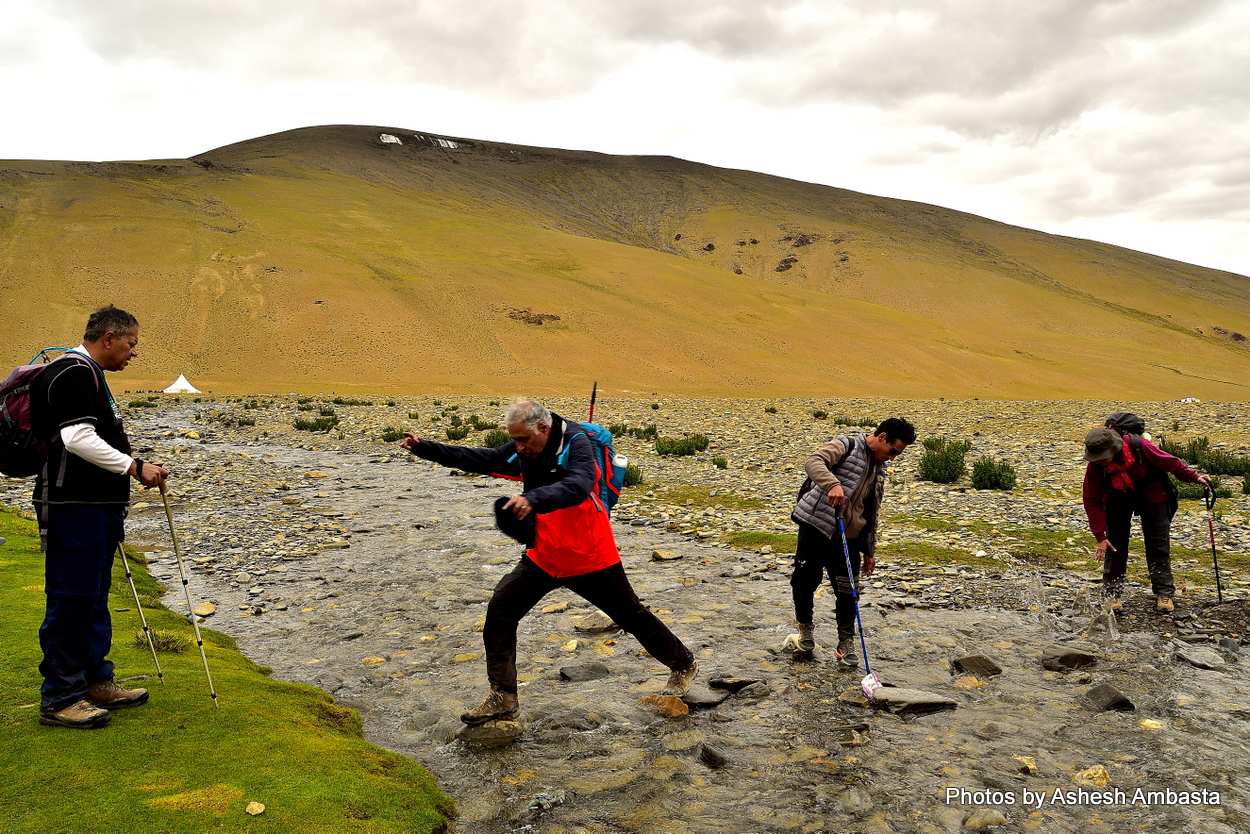 The trek from Tso Kar to Tso Moriri along the stark landscape of Changthang plateau is punctuated with freezing streams and rivulets. Photo by: Ashesh Ambasta

My youngest daughter’s frequent mantra is “yolo,” and my best friend’s wife says our lives now have “fomo”—at 60, you’re always trying to cram in as many exciting adventures as possible. Struggling up the narrow gorge, none of their phrases came to mind. In fact, my mind was blank as I concentrated on putting one foot in front of another, waiting for the pass to come into view. But the route seemed to wind up interminably, disappearing around yet another bend.

I was tired and sweating profusely under my fleece, my body aching after five days on the trail, and my throat was rejecting the sickly sweet ORS flavoured water—why was I putting myself through this at 60? Even as I finally saw the distant prayer flags of Yalung Nyau La pass, I didn’t have an answer. All I felt then was immense relief at having reached the top as I slumped down next to my fellow trekkers.

I looked around at my four buddies who had made this long mountain journey with me over the past five days. Our personal journey together had spanned forty years ever since we graduated from St. Stephen’s College in 1978. Not everyone had been enthusiastic about the trek but we were united by our love for the mountains. Chasing a common goal—the promised lakes—and exploring the mountains on a hard journey on foot had finally brought everyone together. Besides, four decades of shared triumphs and failures, laughter and tears meant that there were no agendas to push, no axes to grind, no judgements to make, just friendship and happiness in being together. It
is said that friends are the family you choose and looking around me, I couldn’t agree more.

My wife Saroj had come for this trip with mixed feelings, part apprehensive and part excited, but by now she was completely worn out. She was brought up in the apple-orchard-dotted hills of Kotgarh but had no real passion for trekking. Maybe life is tough enough in the hills that it quenches the desires to climb them. She is the person who knows me best, the woman I had wanted to grow old with—we celebrated our 32nd wedding anniversary this year. In the words of Antoine de Saint-Exupery, love is “looking outward together in the same direction.’’ Maybe a tough mountain trek was not really her direction of choice but she was willing to share it with me. 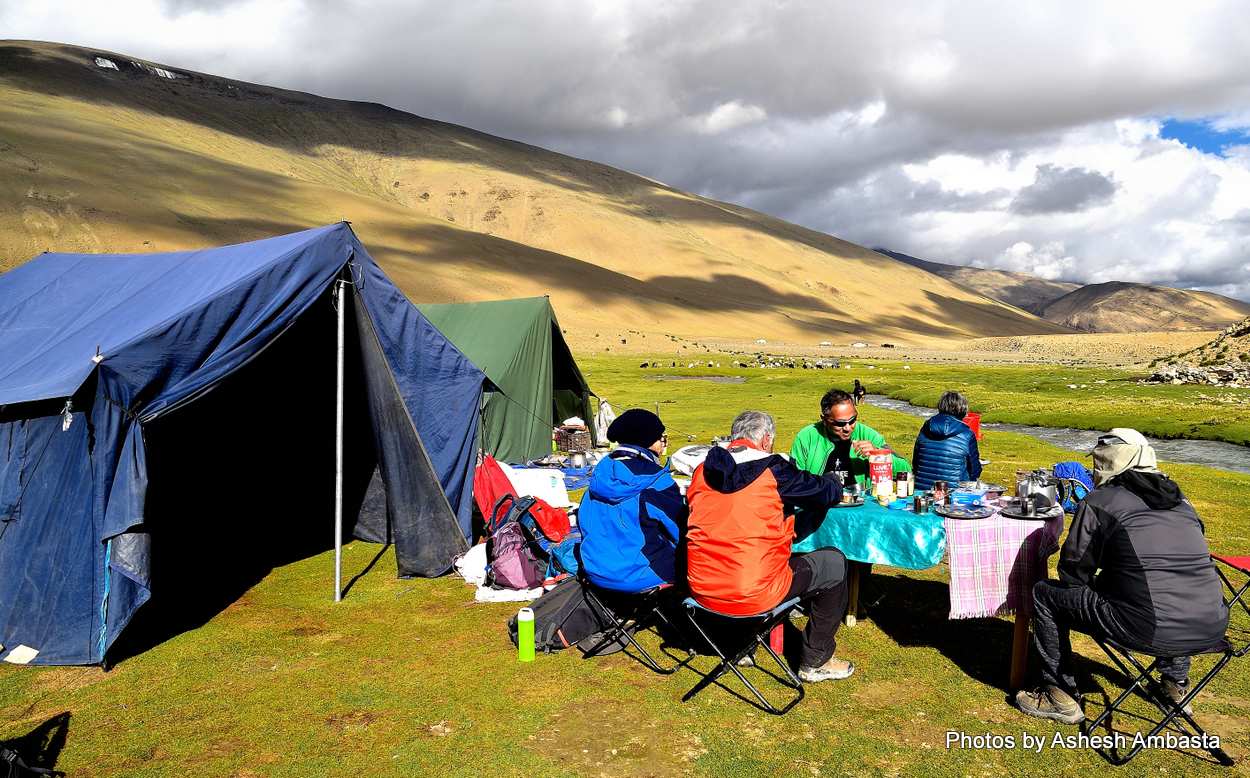 My best friend Praveen, a businessman and a free spirit by nature, looked none the worse for wear. Going by his ample waistline, nobody would have guessed that he would turn out to be the best trekker of us all, and one with a maddeningly cheerful temperament. The Maliks, Ashwin and Shuchi, seemed tired but happy. Ashwin and I had trekked together in Stephen’s but then he got caught up in the corporate grind for decades until Shuchi made him see the light and hit the trail again with our first trek together in Bhutan in October 2015. Since then it was as if a fuse had been lit and he couldn’t be stopped from thinking about the next trek even before one was done. Maa Shuchi, as we fondly call our compassionate friend, is a lover of nature and her spirit made up where the flesh was lacking in driving her on and on. And finally the prodigal son Ashesh—he was fortuitously reunited with us after forty years completing the ‘Fabulous Five’—who introduced us all to rock-climbing in Dhauj in our first year of college.

This trek had been a long time in the making. Completing the iconic Drukpath trek from Paro to Thimphu in Bhutan had been so much fun that we decided we would set off on another to celebrate turning 60. Choosing a trek and destination had certain parameters: not too long or too taxing—we wanted to enjoy, not check ourselves in for an endurance marathon; and fit for monsoon months, which was our time frame. Ladakh, with its unique location in the rain shadow area, was the obvious answer. I was also fascinated by TsoMoriri, the remote mountain lake which shimmered in my imagination like some vision of Shangri-La. And so we set off for the TsoKar (White Lake) to TsoMoriri (Mountain Lake) trek. 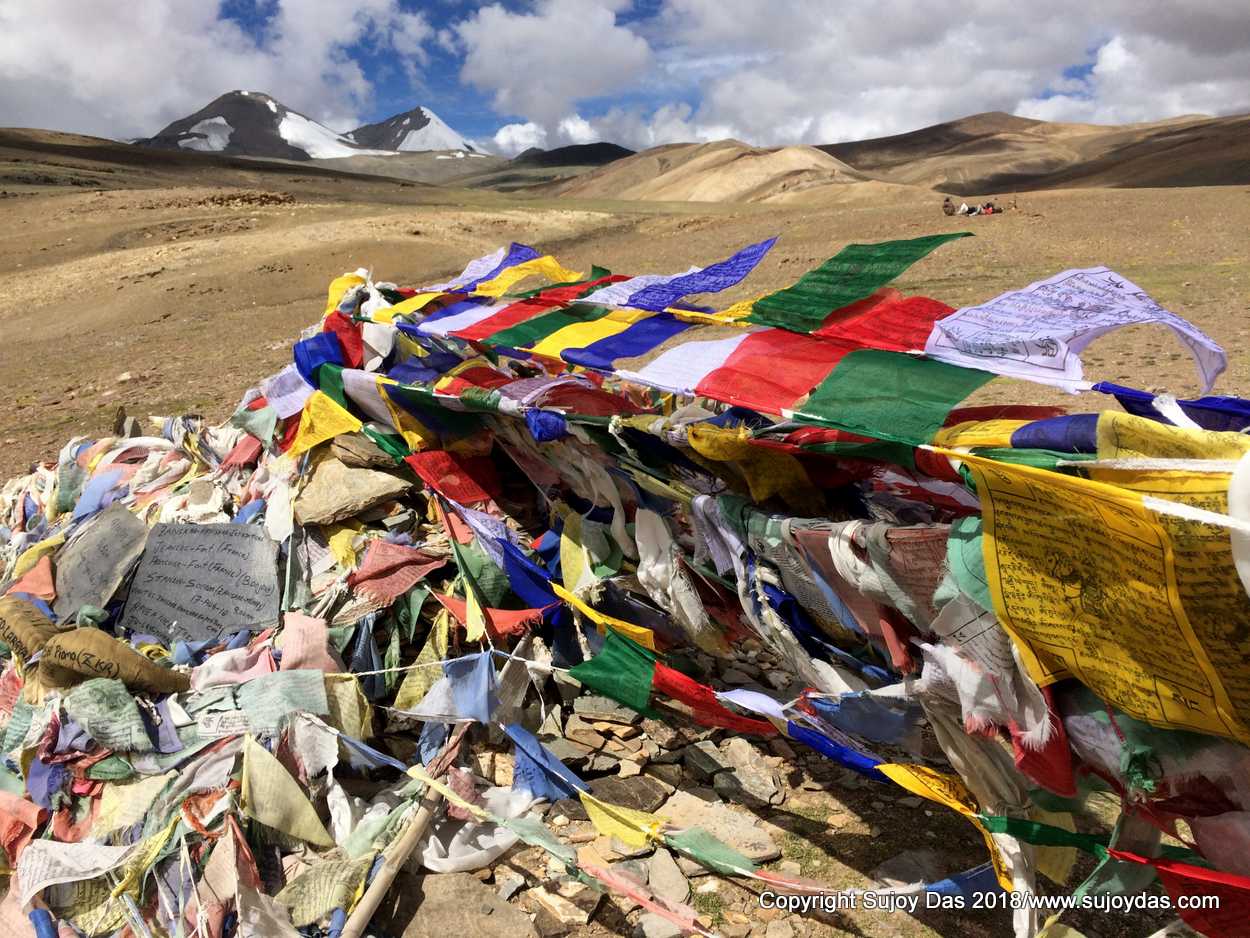 It took four days of climbing 17,000-foot-high passes (top) and descending to expansive valleys to set up camp in meadows until the much-anticipated sight of Tso Moriri—a journey made easier thanks to a team of expert guides and their sturdy animals

Unlike the popular Markha Valley trek, this route is off the beaten track. The logistics of getting to and from the lakes, both several hours from Leh, are difficult. Once out there in the pristine, uninhabited wilderness, we were totally on our own with no connectivity and had to be entirely self-contained. We carried our essentials on a mule train, with the help of a support team of four including our lead guide Stanzin, and our trek organiser and team leader Sujoy Das.

The one thing we had not adequately prepared for, however, was the altitude. We’d spent a couple of days acclimatising in Leh, but the abrupt 3,300-foot-gain in altitude to Tso Kar destabilised the team. That first night of the trek almost everyone suffered from breathlessness and very little sleep was had. Compensation came in the spectacle we saw outside our tents—myriad stars spangled across the black sky. I’ve never thought of myself as particularly religious, but in that moment, it was impossible to not sense the presence of god in this incredible panorama, and to realise the infinitely small nature of man.

Sujoy declared the next day as a rest day to give us time to recuperate. It also gave us time to explore the environs of Tso Kar. The muddy blue lake that had seen better days was now a shrunken shadow of itself leaving behind a vast dry lake bed that we trekked across. The shores were flecked by salt deposits that had collected like dried spit, and mud flats that prevented us from going too close to the water. Soon we realised that we were being watched by a variety of wildlife. In the distance was a pair of kiang or Tibetan wild ass, with horse-like bodies, rich chestnut coats and a wary disposition. If we got close, they skittered away on their ballerina legs. Closer at hand were the adorable Himalayan marmots that stood erect on their hind legs to survey their surroundings (and us, the human intruders) before disappearing into their warren. Saroj and Shuchi even saw a couple batting away with their paws like punch-drunk boxers in a mock fight.

The next morning, Independence Day, dawned bright and clear and we found our own freedom from altitude sickness to be finally on our way. Trailing across a barren valley of the Changthang plateau, we felt like explorers on the moon as we headed for the meadows of Nuruchan. At this altitude on the plateau, streams become rivulets—which we forded on foot—and pasturelands shrink to grassy blotches clinging to a water source. All around us were the grey-brown undulating mountains of the Korzok range, bare of trees but crowned with snow and ice. The wind picked up whistling down the valley and a four-hour journey later, we were glad to finally reach our campsite. From our tents, we could see all the way to the top of the Horlam Kunga pass, a point where the range dips in a swooping curve. Horlam Kunga was our first real challenge, to be crossed the next day.

Next morning, our group made steady progress on the well-defined trail in clear sunshine with Praveen blazing out the lead as usual. However, Saroj was beginning to flag heavily, painfully struggling up the slope. Stanzin and I suggested that she hop on one of the two ponies that were there should any trekker need a respite from walking and she readily agreed. We were soon at the top of the pass looking out at the wide blue slash of Tso Kar on the horizon. After that it was a long but easy slide down to the next valley, where we crossed a freezing stream barefoot, followed by a tiring two-hour trudge to the next campsite. 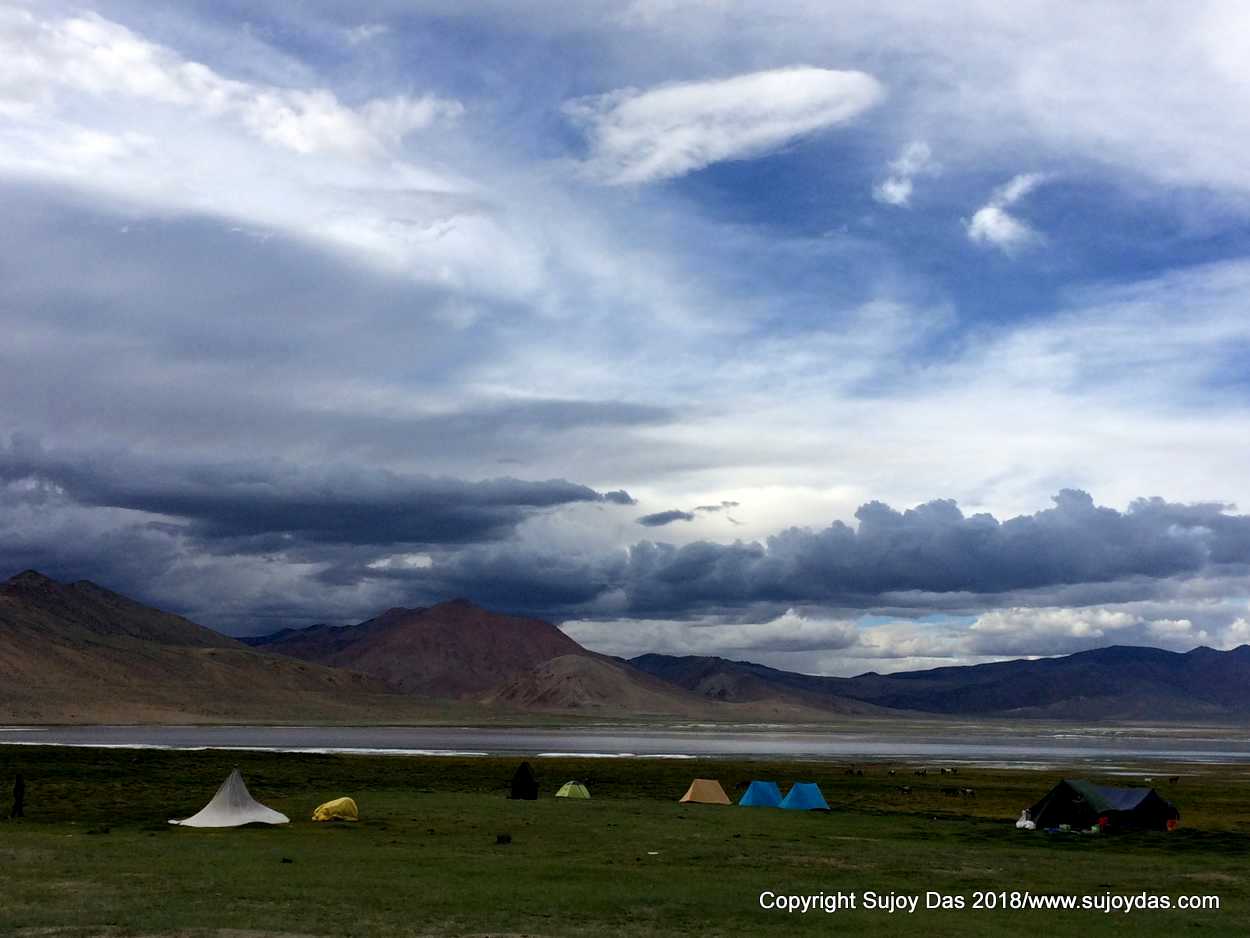 This pattern of climbing a high pass (averaging 17,700 feet) and descending to a meadow campsite repeated itself over the next three days as we travelled closer to Tso Moriri. We would start out in the morning covering about eight to ten kilometres in four or five hours every day. I was in awe of the immense and monotonous landscape; we were mere specks crawling across this cold desert that seemed to stretch on forever and had lived for millennia. The women had decided to use the ponies for the uphill stretches and we got used to having them trot past us as we slogged it up. The journey though arduous was punctuated by numerous moments of laughter, such as the time that Praveen called me out for violating the trekker’s code of conduct when I decided to ride a pony for an uphill stretch.

Our second last night, on the windy plain of Gyama, was freezing and I had to drag out my thick winter parka. But our mood was cheerful and optimistic as we knew the end of our odyssey was near: across the Yalung Nyau pass was the Promised Land (or Lake) of Tso Moriri. That night, our cook Pakzin made us a veritable feast for dinner, finishing with a huge cake with “Happy Trek Ending” iced on top, probably a South Col Expeditions tradition or maybe his way of absolving his sin of polishing off our rum ration.

The next day, Tso Moriri awaited, and beyond it, there would also be hot baths and proper toilets—no more holes in the ground—in the Dolphin guest house at Korzok village on the shores of the lake. But, for now, however, we were bundled up and dreaming of the shimmering lake; the prize at the end of a harsh trek.

Yalung Nyau La was silent. Everyone had moved ahead down the valley but I lingered, soaking in my surroundings. Directly ahead in the distance, were three cones of snow, ice and rock; below to the left the glittering Tso Moriri; and all around were walls of ochre and russet rock, soaring up to the blue sky. Such grandeur could only be wrought by the hand of god. All of a sudden, I felt hot tears well up in my eyes, overwhelmed by an immense gratitude and happiness. I knew then that I was probably brought here after the testing journey for this single moment of epiphany, this moment of feeling complete.

“The mountains speak in wholly different accents to those who have paid in the service of toil for the right of entry into their inner shrines.”

ESSENTIALS
The trek, which starts at Riyul near Tso Kar (4-hr drive from Leh) and ends at Korzok near Tso Moriri (6-hr drive from Leh), is five days long. The group signed up for a trip with South Col Expeditions, which included three days of acclimatisation at Leh (www.southcol.com; Rs80,000 per person including airport transfers and transport between Riyul and Korzok, and Leh).