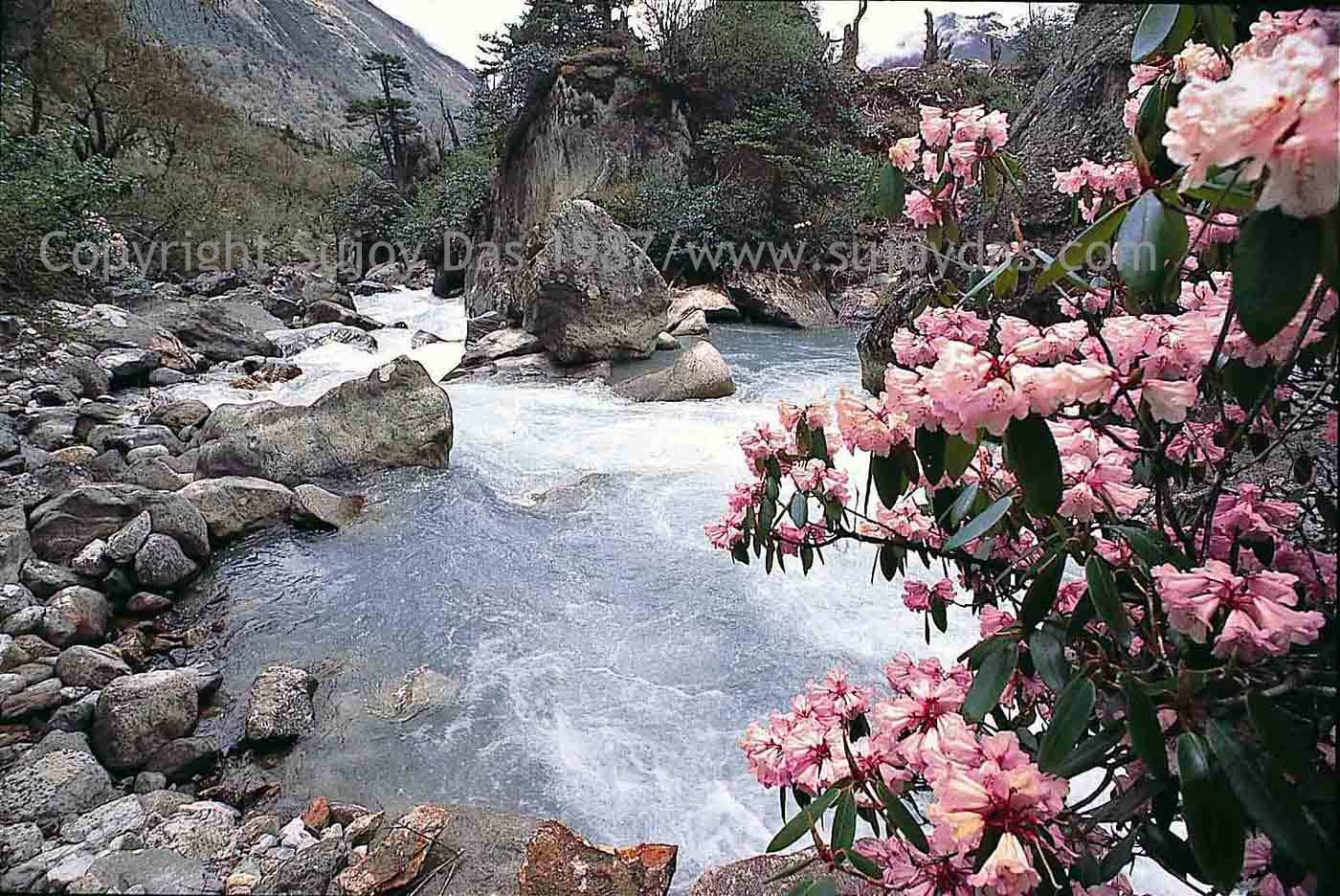 The Himalaya is truly Rhododendron country. As you make your way along the Dzongri trail in Sikkim, extensive forests of Rhododendron can be seen all along the trail and across large tracts of the Dzongri meadows. This flower is the breathtaking glory of Sikkim and the land boasts of some 30 species from the gigantic Rhododendron grande –a tree that towers at 40 feet; to the diminutive nivale that rises barely 2 inches from the ground. Some like the Dalhousie are epiphytes growing on top of tall trees and barely visible from below; others are painted prima donnas: like the conspicuous falconeri with its large fleshy leaves covered with rust-colored filaments on their underside. The Rhodondendron literally live off its looks: the highly colored flowers are crucial since they are the only source of attraction for bees and butterflies since no species has any fragrance. 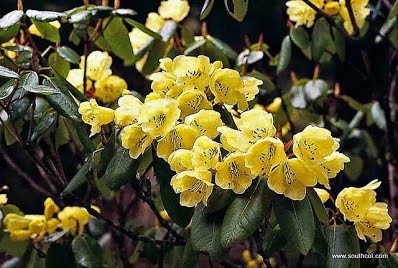 These trails were also the favorite stamping ground of the man who pioneered the first attempt to systematically explore the land and document information about the flora and fauna of the Eastern Himalaya: Joseph Dalton Hooker. The British botanist was the son of the first Director of London’s renowned Kew Gardens, and a close friend of Darwin’s. After obtaining his MD from Glasgow University in 1839, young Hooker traveled extensively for most of his life going off on botanical expeditions to all corners of the world (including the Antarctic region) and publishing prolifically on his findings and theories. He came to Sikkim for the first time in 1848 and his year-long travels resulted in an amazing record of the numerous species of animal and plant life, many if which turned out to be completely new biological and botanical discoveries. Numerous species of rhododendrons, orchids (like the spectacular golden yellow Dendobrium Hookeriana with its deeply fringed lips and rich purple spots) and ferns are named after Hooker in acknowledgement of his having brought them to the notice of the western world. He published Rhododendrons of Sikkim in 1849 (considered even today to be the authoritative text on the subject); while his Himayan Journals – a travelogue – is a classic treasured by naturalists, historian and sociologists. The stunning botanical drawings are now valued as works of art,  Hooker succeeded his father to the Directorship of Kew in 1856.

The rhododendrons seen in the Sikkim Himalaya are also seen on the other trekking trails in Nepal, Garhwal, Kumaon, Himachal etc. The forests below Ghorepani are a favoured spot to photograph these blooms in March-April. On the Everest trail the forests between Phakding and Monjo also have a profusion of blooms in spring. In the Darjeeling district the Singalila trek of Sandakphu and Phalut are also a baze of colour in spring. Our Everest trek in April 2011 should see a lot of these blooms en route.
SUJOY DAS