Who should join this trek?
A good choice for regular hill walkers, high level of fitness required. Prior trekking experience advisable.
1) Walking times: average 5 to 8 hours walking per day (with some longer days Lobuche to Everest Base Camp and back upto  ten hours) with some rest days included.
2) Altitude: up to 5,646 m at Kala Pattar
3) Terrain: for some of the time following well-travelled trails although also likely to encounter rough and rocky conditions. There is a steep ascent  to Kala Pattar  which could be snow covered.
4) Remoteness: the trek is in a remote mountain area and a long distance from the roadhead and the nearest cities. However mobile phones and wifi will work on most of the days.
5) High altitude insurance including emergency evacuation insurance by helicopter is compulsory for this trek.

Trek Leader - The trek will be led by a senior South Col Nepal guide  with many visits to the Everest region.

Minimum group size is four for this trek 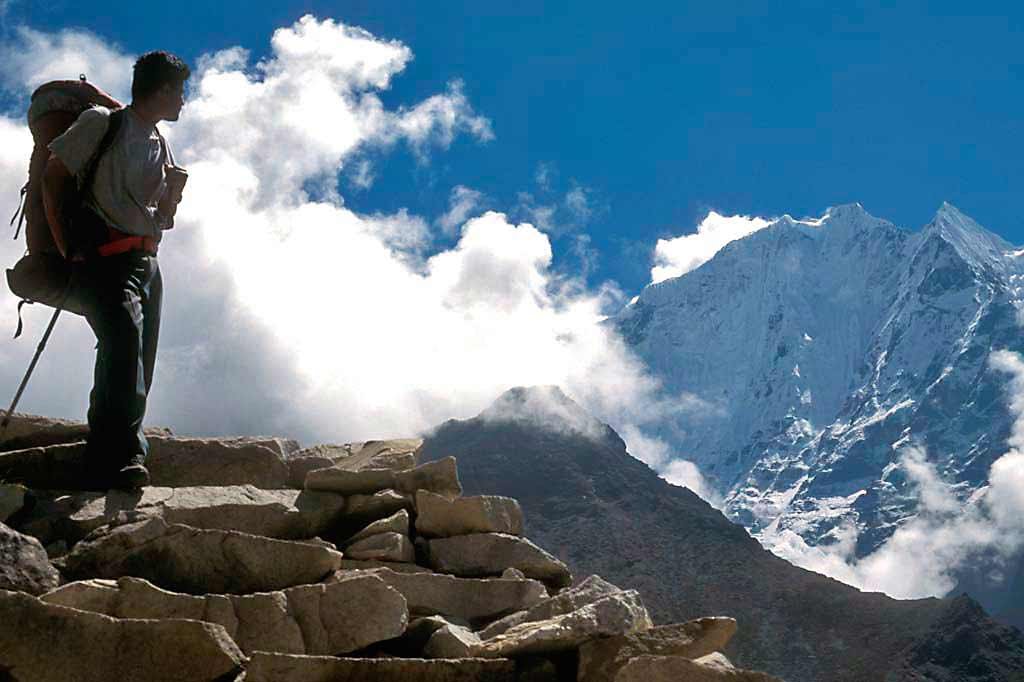 DAY WISE SCHEDULE FOR THE TREK

Day 1: Flight from Kathmandu to Lukla and walk to Monjo (6=7 hours) We take the early morning flight from Kathmandu and land at Lukla airport in 30 minutes. After breakfast at a lodge in Lukla we begin the first day’s walk toMonjo (2850 metres) if the flight is on time. We stop for lunch on the way at Thado Kosi or Ghat.

Day 2: Monjo to Namche Bazar (3450 metres) (4 to 5 hours)We leave Monjo after breakfast and walk up to the National Park gates15 min away. After checking of our permits we descend in 20 minutes to Jorsale where we stop for tea, From Jorsale we cross the Imja Khola and start the steep three hour climb to the Sherpa capital Namche Bazar.

Day 3 Acclimatization Day in Namche Bazar We have our first acclimatization day at Namche. Many of us would sit at the bakery and have apple pie while the more intrepid would go for an acclimatization walk to the top of the hill!

Day 04 Namche Bazar to Devoche (3790m) (6 to 7 hours) We leave Namche and follow the trail to Kyanjuma and then drop into the valley to Phunki Tenga. From Phunki it is a two hour climb to Thyanboche. From Thyanboche the lodges of Devoche are 20 minutes down the valley.

Day 5 Devoche to Dingboche (4350m) (5 to 6 hours) The trail leaves Devoche and then crosses the river over a suspension bridge which offers a great view of Ama Dablam above the crashing waters of the Dudh Kosi. It then passes a large mani wall in the middle of the trail and finally levels out to reach Pangboche. The trail follows the Imja Khola and passes the yak grazing areas of Shomare and then the small tea house of Orsho. The trail then crosses a bridge over the river. The right path leads to Dingboche about 45 minutes from the bridge.

Day 06 Rest Day at Dingboche The rest day at Dingboche can be used for a day walk upto Chukung with fabulous views of the Lhotse/Nuptse wall and Ama Dablam as well. Alternatively a half day walk can be made to the Nangkartshang peak or the Ama Dablam lakes across the moraine.

Day 07 Dingboche to Lobuche (4940m) (5 to 6 hours) We climb the ridge behind the village and then come onto a level plain with enormous views of Taboche in the background. The trail continues along the plain and then crosses a bridge and climbs gently to Dugla 4600m. We stop at the Yak Lodge for an early lunch at Dugla. The hill to climb after Dugla can be hard especially if you are having problems with altitude. At the crest are the "Everest memorials" for sherpas and climbers who did not make it down from Everest. From the memorials the gradient eases off and in about an hour you can spot the lodges of Lobuche.

DAY 6 - Walk from Dingboche to Chukung and aim to acclimatise around 5200 metres for a day hike. Night at Chukung.

DAY 7 - Cross from Chukung to Lobuche via Kongma La pass 8 to 9 hours walking and meet the group at Lobuche.

Day 08 Lobuche to Gorak Shep (5170m) (3 to 4 hours) The trail follows the moraine of the Khumbu glacier and there is a lot of hard walking over boulders and scree slopes. Pumori comes into view as one approaches Gorak Shep. We usually reach Gorak Shep by 11 am in the morning. If the weather is good we can make it to Kala Pattar in the evening. Alternatively those who want to attempt Everest Base Camp can go to EBC from Lobuche leaving in the early morning after lunch at Gorak Shep.

Day 09 Gorak Shep to Everest Base Camp /Kala Pattar (5554m) and back to Lobuche
The climb to the view point of Kala Pattar would take around two hours depending on the level of acclimatization. From this high point a, magnificent 360 degree view unfolds with all the major peaks of the region visible. We come down in an hour to Gorak Shep and after a quick lunch head down the valley to Lobuche which is usually reached by evening. This is a long day but a better alternative to spending two nights at Gorak Shep. In case it is possible time permitting the group may go down to Pheriche instead of Lobuche decision will be taken in Gorak Shep.

Day 10 Lobuche to Pangboche (5 to 6 hours)
The descent down the valley is now swift as we are losing altitude and the air is getting thicker. We stop for lunch at Pheriche and then reach Pangboche by late afternoon.

Day 11 Pangboche to Namche Bazar ( 5 to 6 hours)
We walk down to Thyangboche and then with a quick stop for tea descend steeply to Phunki Tenka. Lunch is at Phunki Tenka and we then climb for Namche Bazar which we reach by evening

Day 12 Namche Bazar to Monjo and down to Lukla ( 8 hours )
We leave Namche after breakfast by 7 30 am and descend steeply to the Benkar Bridge. From the bridge we climb up to the Park Headquarters and then the trail levels and enters Monjo where we stop for tea. We continue on the Phakding for lunch and then walk four hours to Lukla which we would reach between 3 and 4 pm.

Day 13 Buffer day to be adjusted as needed – also for any delays contingencies .

Costs given above are at current rates of 2017 and may change without notice. Changes if any will be notified 3 months before the trek.

Taxi fare from hotel in Katmandu to airport and back for Lukla flight
Sagarmatha National Park permit and TIMS permit for trekking in the Everest region.
Flight cost Kathmandu Lukla to Kathmandu presently USD 360 return.
All accommodation on the trek on twin sharing basis. In Namche Bazar for two nights top end deluxe rooms with attached bathrooms and hot showers will be provided and on return one night similar facilities will be provided. Rest of the accomodation with be rooms on twin sharing basis with non attached bathrooms - usually in the corridor.
Hotel accommodation in Kathmandu one night on the way in and one night on the way out is covered in good Thamel hotel with breakfast.
Cost of porters/guides for the trek. Please note that porters will carry one duffel bag or backpack not exceeding 10 kgs weight for each trekker comprising of personal items, clothing, sleeping bag etc.
Costs not included

Meals in Kathmandu and Lukla.
Breakfast lunch and dinner on the trek is not included. Desserts, drinks, and exotic items listed in the lodge menus are not included. Alcohol, cold drinks (coca cola, sprite, beer), juices, ice cream etc on the trek and in Lukla.
Client travel and medical insurance of any kind. Emergency evacuation costs if needed.
Video camera fees in National Parks (where applicable).
Bottled drinks; boiled, filtered or bottled water; alcohol; snacks etc
Hot showers (Rs 300 per shower) is not included at lodges with shared toilets.
Personal clothing and equipment; sleeping bag; down/ goretek jacket, medicines for personal use etc.
Air fare from residence country to Nepal and back
Tips to porters at the end of trek estimate @ US 50 per trekker to the common pool.

IN CASE OF LEAVING THE GROUP
If due to illness or any other reason a client has to leave the group and go down or wait at a campsite for the group to pick him/her up on the way back, all expenses including lodging, fooding and any porter/guide related expenses if any are to be borne by the individual client over and above the trek fees paid for the trek. There are also no refunds for leaving a trek before completion.

CAMPSITES ON THE TREK
The choice of campsites to be used on the trek will be decided by South Col and clients will have to stay at these designated campsites. Clients are not permitted to choose their own campsites on the route.

LODGES ON THE TREK
The choice of lodges to be used on the trek will be decided by South Col and clients will have to stay at these designated lodges. Clients are not permitted to choose their own lodges on the route.

TREK ROUTE
The trek route and day wise schedule will be fixed by South Col and will have to be followed by the client. Clients are not permitted to choose their own routes and night stops.

EVACUATION BY HELICOPTER
In the eventuality of not being covered by emergency helicopter evacuation insurance and an evacuation is considered necessary, the cost of the evacuation will be paid by the client in advance to the helicopter company/travel agent etc as deemed necessary.

DELAYS DUE TO BANDHS, STRIKES AND OTHER FORCE MAJEURE EVENTS
In the event of a delay in starting or ending the trek due to issues beyond the control of South Col, additional costs if any arising out of the same would have to be borne by the clients.

RISKS AND LIABILITY
The trek is in a remote mountain area and has certain additional dangers and risks, some of which include: physical exertion for which the client should be prepared; weather extremes subject to sudden and unexpected changes; remoteness from normal medical services; evacuation difficulties.
In the event of injury or illness South Col Expeditions (Sujoy Das) or its Staff can, at the clients cost arrange any medical treatment and emergency evacuation service as it or they deem necessary for the health and safety of the client. Waiver of liability and release form to be signed by the clients prior to the trek.